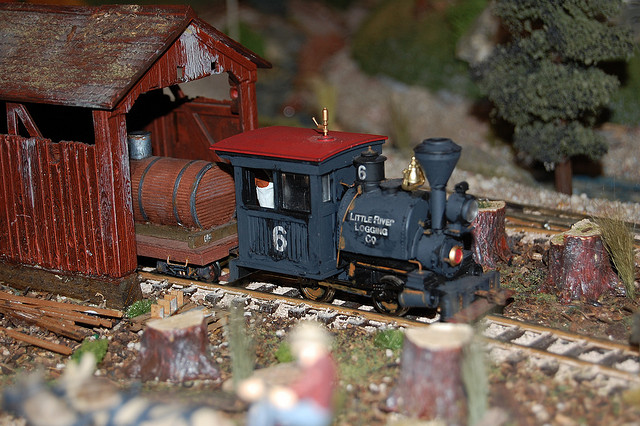 There, I said it. There's a lot to like about O Gauge, but On30 is NOT one of them. Not to disparage the work of some incredibly talented modelers, but there is very little to like about On30. I know... if it sucks so bad then why is it so popular? Well, there are reasons.... here's where On30 came from, what's wrong with it, and some better alternatives...

Where did On30 come from?

At one time, O Scale narrow gauge modeling was expensive. The only locomotives available were expensive brass imports, and detail parts, trucks, etc. were hard to find. Then one day a couple of really talented modelers decided they wanted to experient with O narrow gauge without buying expensive brass locomotives. They noticed that HO standard gauge track scales to 30" gauge in O Scale - "close enough." They built a few locomotives based on HO scale mechanisms, freight cars using HO scale trucks, and slapped them on to a 1/48 diorama - and On30 was born. Because the modelers involved in this experiment were incredibly talented, the trains and diorama looked great in spite of the track gauge being way off.

Later, a major manufacturer (Bachmann) was looking for an easy way to come up with some trains that would work well with the Christmas Villages made by Dept. 56 and others. HO Scale was too small, and O Gauge was too big. Running smaller O Scale narrow gauge equipment probably seemed like the perfect solution at the time. The smaller equipment looked better with the Dept. 56 buildings, and the HO scale track meant they wouldn't have to come up with a new track system.

Many modelers who'd never considered O Scale narrow gauge before (because of the expense) took note. They saw the cheap prices of of the Bachmann On30 equipment and noticed the work done earlier by Paul Scoles, etc. Suddenly O Scale narrow gauge was affordable and had potential. Instead of selling their trains to Christmas Village collectors, Bachmann started selling lots of On30 equipment to model railroaders. In fact, sales were so good that soon they (and other companies) were making dedicated On30 track, more prototypical On30 locomotives and rolling stock, and soon a whole new cottage industry was born - On30. So what's wrong with that? The main problem I have with On30 is the gauge is wrong whether you're modelling a 2 foot or a 3 foot gauge line. The other problem I have is that the 30" compromise is totally unnecessary and it keeps manufacturers from producing equipment in prototypically correct gauges.

The really galling thing is such a compromise is totally unnecessary. Today, most On30 equipment is built on dedicated On30 running gear and runs on dedicated On30 track - both of which wouldn't cost any more to manufacture than correctly gauged 2 and 3 foot models. That horse has already left the barn though, and now we're stuck with the unprototypical monstrosity called On30.

What are the alternatives to On30?

In O Scale, there really is no cheap alternative to On30. If you want a correctly gauged O scale narrow gauge layout, you're going to have to pay the price for expensive brass imports. Switching to S Scale would be a good alternative. Sn2 locomotives (mostly Forneys) show up on eBay pretty regularly for less than $300 (though running gear for freight and passenger cars can be a problem). Used brass in Sn3 shows up fairly often too (I picked up a painted SP #8 for $450 and an unpainted C16 for $275) or you can get Railmaster Hobbies locomotive kits for around $500. Thanks to P-B-L, rolling stock kits are readily available and affordable. Finally, if you don't mind the track gauge being slightly off HO track scales to 42" in S Scale which is closer to 36" track percentage wise (and also visually) than 30" track. Tyco makes a 4-6-0 that's exactly scaled for S so you could get a R-T-R Sn42 steam locomotive for less than $100.

So what's my problem?

Nothing really. It's just so disappointing that On30 has become so popular at the expense of the correct On2 and On3 scales. There would have been almost no downside for the manufacturers to produce correct On2 and On3 models and track, and so much upside for narrow gauge modelers. The fact they went with the initially convenient solution is a big disappointment, at least to me.