I'm tired of being an armchair model railroader...

So I finally ordered the track for my $100 Layout (that's per month, not "total"). I had a hard time deciding what track to run, what track plan, blah blah blah and I finally decided I'm sick of piling up more and more toy trains with nowhere to run them. Since there's no such thing as a perfect layout anyway (especially when you're trying to cram an O Gauge layout onto a 4x8 table) I decided to just stick with the FasTrack that came with my Polar Express set. For my track plan, I used SCARM (a free layout design program) to draw up a simple layout based on Lionel's D-290 display layout. For now I'm leaving off the upper loop, but I might add one later with HO scale track so I can run my On30 Porter and Shay locomotives. One reason I decided to stick with the FasTrack instead of going with Atlas track is the built-in roadbed means I can run on the carpet until I get my train table built. Here's what the track plan looks like: 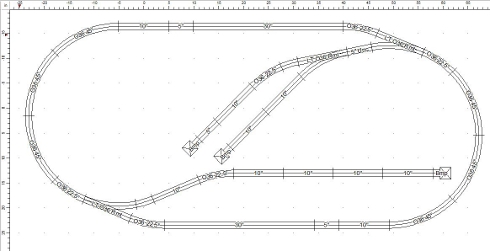 (Related links: A $100 Layout, Free train layout software)
Posted by Unknown at 7:43 AM